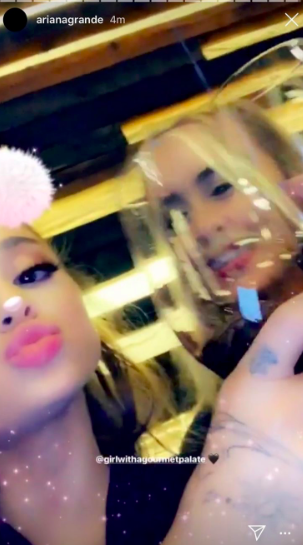 What is it like to be part of Ariana Grande’s team? Pretty sweet, actually, because no matter how big of a star Grande is, she makes sure the people who take care of her are also taken care of. In the midst of her summer “Sweetener” tour, the international superstar threw a surprise birthday celebration for one of her security guards at Top Chef alum, Fabio Viviani’s Italian restaurant, Siena Tavern in Chicago on Sunday night. Following her performance at the city’s major music festival, Lollapalooza, where she live debuted her newest track, “Boyfriend,” Grande and 16 others, including one of her best friend’s Alexa Luria, made their way from Grant Park to the River North restaurant.

To her security guard’s surprise, who thought dinner at Siena Tavern was going to be a simple post-performance meal, he was greeted to a private dining room, decked out in birthday swag requested by the pop-star herself. She asked for the room to include “Happy Birthday” balloons and other decorations, as well as a special birthday cake created by the restaurant. The group consumed Veuve and Casamigos cocktails and Grande made sure her favorite dish at the restaurant, Burrata, was served. On her way in, many guests recognized the singer, who wore knee-high boots and an oversized sweatshirt, which she gracefully said, “Hello” and posed for a few photos.