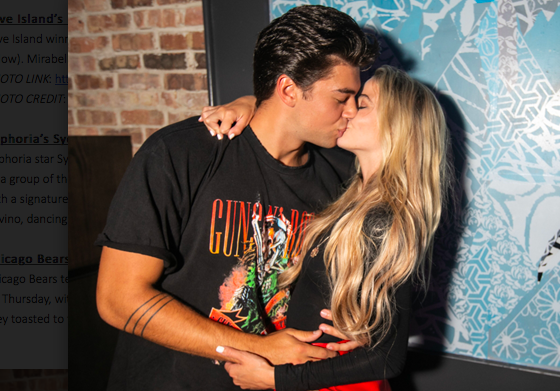 Love Island winners Elizabeth Weber and Zac Mirabelli were spotted at TAO Chicago nightclub over Labor Day weekend, affectionately kissing up on one another (photo below). Mirabelli, a local Chicagoan, seemed excited to show his new love interest a hometown haunt.

Euphoria star Sydney Sweeney celebrated her boyfriend Jonathan Davino’s birthday at TAO Chicago over the weekend. Taking over a private sky box, the couple were joined by a group of their friends, and shared several TAO specialties like Crispy Rice Tuna, Lobster and Shrimp Spring Rolls, Beef Mongolian and Crispy Orange Chicken, complete with a signature Fortune Cookie for dessert. After dinner, the group headed up to TAO nightclub to continue the birthday festivities. Sweeney was very affectionate with Davino, dancing on the banquette with him to the sounds of Sam Feldt as they toasted with Dom Perignon.

Chicago Bears teammates Khalil Mack, Akiem Hicks and Eddie Jackson headed out for a “last hurrah” at TAO Chicago this past weekend before the NFL season officially kicks off Thursday, with the Bears hosting the Green Bay Packers. At the team dinner, the group feasted on TAO favorites like the Crispy Orange Chicken and Lobster Fried Rice, as they toasted to the end of the summer.