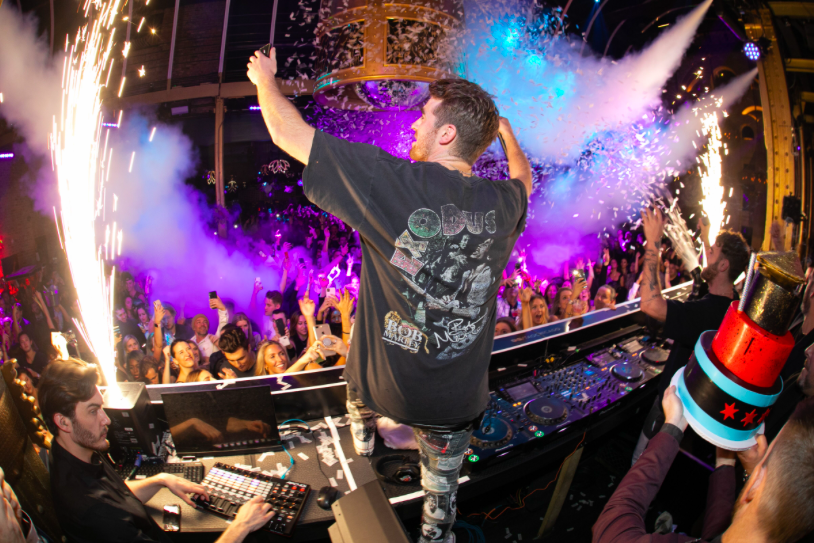 TAO Chicago celebrated their first anniversary in the Windy City on Friday, October 4 with a memorable party featuring special guests, The Chainsmokers. The duo, including Alex Pall and Drew Taggart, gave an exhilarating, sold out performance at the United Center on their World War Joy tour before heading to the Pan-Asian restaurant for a dinner party in TAO Chicago’s private sky box. Alex and Drew enjoyed a specialty celebration menu, alongside band 5 Seconds of Summer who is also on tour with them, friends and team members, honoring TAO Chicago’s first anniversary and the launch of The Chainsmokers’ new JAJA Tequila, Añejo. The group noshed on TAO favorites, like Satay of Chilean Seabass and Spicy Tuna Tartar on Crispy Rice, paired with JAJA Tequila, and after dinner made their way upstairs to TAO Chicago nightclub where The Chainsmokers took the stage and performed for a packed house. Partygoers sang along to hits like “Takeaway” and Drew stood atop the DJ booth and serenaded the crowd to “Paris” and “Closer” as they went wild. Later, a custom-made TAO Chicago anniversary cake donning the city’s iconic four stars was presented in the DJ booth as Drew and Alex shouted “Happy Anniversary” to guests alongside TAO Group Hospitality partners and team members for an epic night to remember.